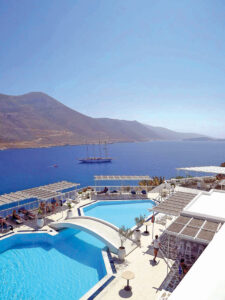 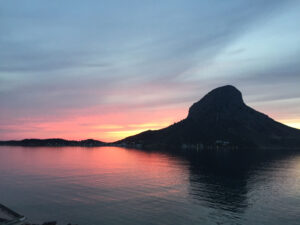 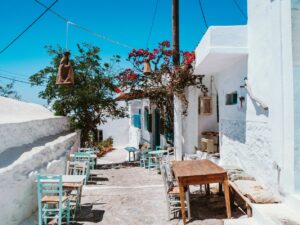 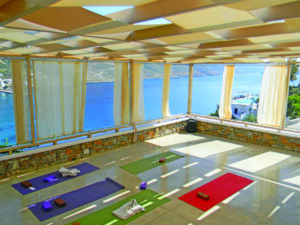 Food included in the package

Enjoy delicious fresh food at award-winning Ambrosia Gallery Restaurant. You will be served an abundant breakfast buffet daily, as well as a tasty lunch and dinner. They use fresh food and locally grown vegetables and a variety of spices grown on the island. The meals are all vegetarian and vegan. Please let the school know at the time of your booking if you have any specific dietary requirements.

The following dietary requirement(s) are served and/or catered for:

Welcome to an oasis of luxury and peace where you will experience comfort, elegance and plenty of inspiration. Famous for being a top yoga destination worldwide, at Aegialis Hotel and Spa we offer 5 beautiful yoga shalas and an outdoor rooftop, with direct views to the crystal clear Aegean sea and the Amorgian mountainous landscape.

Each shala comes with high end complimentary props and a unique energy of tranquility and bliss. We have welcomed over 700 yoga groups from all over the world to experience the magic of Amorgos island with Aegialis. Every year, more than 2000 yoga enthusiasts come to Aegialis to explore their yoga, meditation and wellness practices. Your experience here will be one of tranquillity, transformation and joy. We are happy to welcome you to our beautiful island.

Experience 5-star luxury in an island famous for having one of the highest magnetic fields in the world. Located on a slight hill overseeing the entire Aegiali Bay, Aegialis Hotel & Spa offers you a front-row seat to sea views and the majestic mountainous landscape of the island. This is a prime location, with only a short walk to the beach and the Aegiali shops.

Nicki Doane is an internationally recognized yoga teacher, known for her ability to make the practice of yoga accessible to every body. She began her study of yoga at the age of 18 while attending the University of Massachusetts. From her first class, she knew she had found something special and deeply familiar. While she began to practice yoga on a purely physical plane and because it felt good, it became apparent some years later that there was more to Yoga than she originally thought. In 1991, Nicki traveled to Mysore, India to study with Sri K Pattabhi Jois, the master of Ashtanga Vinyasa Yoga. She fell in love with the practice and continued her studies with Pattabhi Jois until his death in 2009. What she experienced on that first trip was a radical realization that yoga is much more than a physical practice. The yoga affected her deeply on an emotional and spiritual level. After that, she was hooked! As she delved deeper into the Ashtanga practice she became curious about her teacher’s teacher and his lineage. She learned that Tirumalai Krishnamacharya had been Pattabhi Jois’ teacher and also the teacher of BKS Iyengar. This led her to study Iyengar Yoga with Mr. Iyengar, his children and with many of his senior teachers as well including Gabriella Giubilaro and Patricia Walden, at his institute in Pune, India. Nicki has always believed that her practice continued to grow and evolve due to her study and practice of both of these systems of Yoga. Nicki continues to study yoga with senior teachers and believes that a great teacher must always remain a dedicated student.

Nicki’s teaching has grown out of her practice and her deep faith in yoga and she chooses to honor her students as individuals first and foremost. Nicki’s style combines asana, pranayama, philosophy, and poetry and her classes are strong and accessible to everyone. Nicki uses humor in her teaching to set her students at ease and she is considered to be very relatable and down to earth. She is known as a Teacher’s teacher and loves igniting the spark of yoga in her students.

Nicki lives on the beautiful island of Maui, Hawaii, where she owns and directs the Maya Yoga Studio on the North Shore of Maui. She has been featured in numerous articles and has graced the cover of Yoga Journal magazine. She is featured in 2 Ashtanga Yoga videos available through Gaiam and in 9 videos entitled Maya Yoga Vinyasa on her youtube channel. She is currently finishing a book on Yoga for beginners.

Nicki Doane is an internationally celebrated yoga teacher from Maui, Hawaii. She is known for her attention to detail in asana practice and also for her accessible way of weaving the deeper philosophical teachings of the yoga sutras into her classes. Nicki teaches a style of yoga that draws on her extensive background in both Ashtanga and Iyengar yoga. She studied directly with Pattabhi Jois and the Iyengar family in India. Her classes are strong alignment based that are vinyasa in nature and deeply absorbing in both body and mind.

This week of yoga with Nicki is about slowing down and enjoying the end of summer together. To savor the pace of a summer day and to delight in the bounty of the summer harvests to fill ourselves up for the coming months. It’s a perfect time to relax and renew before the busy seasons of Fall and Winter set in. We will have a stronger yoga practice in the morning and a more mellow session in the evening. I am excited because this hotel has several designated yoga spaces on the property and lots of yoga props!! Restorative yoga and pranayama in the evenings for sure.
So, take this time for yourself or with a friend and come to Greece with Nicki to practice yoga, share meals, lounge on the beach, swim in the sea, get a spa treatment, meditate overlooking the ocean, and soak up the beautiful Grecian sun.

See you on the island of Amorgos, Greece in September 2023!

Every retreat is unique and, as such, the itineraries are ever-changing! We finalize the itineraries about 3-6 weeks before the retreat, but after 10 years of hosting retreats, we do have a general idea of what most schedules look like.

Most retreats include one-to-two daily yoga classes. One class takes place in the morning, either just before or just after breakfast. After the first class and meal, you have free time to explore, relax, or take part in optional add-on activities. Lunch (if included in your retreat) will take place midday, during this free time. There is then, usually, an afternoon class followed by dinner. Occasionally some teachers choose to offer an evening restorative class or group gathering after dinner as well.

In addition, there is usually one dedicated “excursion day” in which we do not have scheduled yoga classes. This is a day for people to take advantage of some of the more involved tour and excursion offerings and is always a lot of fun!

Again, this is a very general look at what your retreat schedule could be. We work closely with the teachers to design unique itineraries that reflect their style and the group that’s traveling with them. Once your specific retreat itinerary is complete, we will send it out via email, usually two or more weeks before the retreat starts. Please keep in mind all retreat itineraries are subject to change.

Fun in the Sun!

We use cookies on our website to give you the most relevant experience by remembering your preferences and repeat visits. By clicking “Accept”, you consent to the use of ALL the cookies.
Cookie settingsACCEPT
Manage consent

This website uses cookies to improve your experience while you navigate through the website. Out of these, the cookies that are categorized as necessary are stored on your browser as they are essential for the working of basic functionalities of the website. We also use third-party cookies that help us analyze and understand how you use this website. These cookies will be stored in your browser only with your consent. You also have the option to opt-out of these cookies. But opting out of some of these cookies may affect your browsing experience.
Necessary Always Enabled
Necessary cookies are absolutely essential for the website to function properly. These cookies ensure basic functionalities and security features of the website, anonymously.
Functional
Functional cookies help to perform certain functionalities like sharing the content of the website on social media platforms, collect feedbacks, and other third-party features.
Performance
Performance cookies are used to understand and analyze the key performance indexes of the website which helps in delivering a better user experience for the visitors.
Analytics
Analytical cookies are used to understand how visitors interact with the website. These cookies help provide information on metrics the number of visitors, bounce rate, traffic source, etc.
Advertisement
Advertisement cookies are used to provide visitors with relevant ads and marketing campaigns. These cookies track visitors across websites and collect information to provide customized ads.
Others
Other uncategorized cookies are those that are being analyzed and have not been classified into a category as yet.
SAVE & ACCEPT